When Ashlee Ammons and her mother, Kerry Schrader, founded Mixtroz in 2015, they wanted to provide an alternative to the awkwardness of traditional networking events. Primarily a software company, Mixtroz is designed to promote more impactful networking events that break the mold. As Ammons says, “Mixtroz was really born out of experiencing the problem in real-time and then looking for a solution to solve that problem. We couldn't find what we were talking about. And so we built it ourselves”

Pulling from their experiences in human resources and event planning, the mother-daughter duo set out to create a better networking experience by offering tools for companies that enhance networking events while providing valuable data collection opportunities both online and offline. 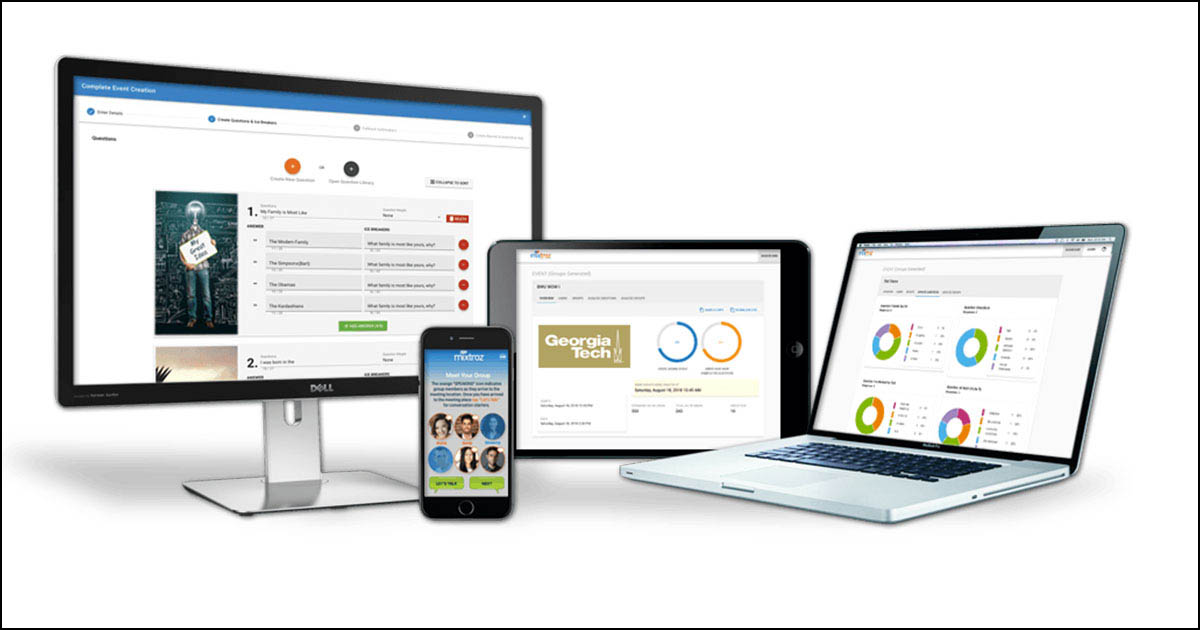 The concept for Mixtroz was born over a weekend, after founders attending networking events that fell flat. “We realized at the same time, on the same weekend, that networking at events is terrible. And it's terrible for many reasons,” says Ammons. “Most people associate [networking] with feeling dirty because they feel like they're walking up to somebody and trying to get something from someone. And we recognized that that process could be better because networking when done right is incredibly valuable, both personally and professionally.”

While networking at events throughout their professional lives, Schrader and Ammons noticed people tend to exhibit three behaviors. The first is that they go to events with one or more people they know and, typically, spend their time socializing within that group rather than with others. Secondly, people will attend events with the intention of meeting and connecting with new people but end up gravitating towards people they are familiar with or towards people with a similar outward appearance as them. And lastly, people will often feel uncomfortable in networking situations and turn to their phones to disengage. As Ammons says, “we as humans will do whatever we can to make ourselves feel comfortable,” which is a major roadblock for anyone attempting to do something as uncomfortable as networking with strangers.

Based on this information, the pair developed Mixtroz to offer an alternative to traditional networking that encourages organic connections in professional, educational, and personal settings. Mixtroz operates as a software-as-a-service (SaaS) company that provides what is referred to as “Community-as-a-Service” (CaaS) to connect groups of people while simultaneously gathering valuable data.

Here’s how it works: users download the Mixtroz app, fill out a virtual name tag, and complete the survey customized by the event organizer. Then, at the time of the event, participants are matched together in groups of two to nine based on their survey answers. While participants network, the event organizer(s) have access to a variety of data on both individuals and groups to learn and adapt future events, marketing campaigns, and programming tactics.

Clearly, their method of redefining networking has paid off. Since its inception, Ammons and Schrader have amassed an impressive following of customers and praise from various publications. Most notably, the pair was named “Powerful Women” in 2019 by Entrepreneur Magazine on its inaugural list, along with a litany of additional accolades and achievements.

As two experienced professionals, Ammons and Schrader have a tremendous amount of insight to offer aspiring entrepreneurs, such as living the company’s mission statement: “[L]iterally, we live what our mission is, which is this networking matters, this connectivity matters, being open matters.” Not only does this keep the founders connected to the values and purpose of the company, it signals to customers that this is a company that genuinely cares about what they’ve set out to do.

Another lesson Ammons had to share with aspiring entrepreneurs is to utilize the internet as your resource to learn important information while starting out. “We [Ammons and Schrader] say that everything that we learned was from the University of Google. So for anybody who is starting out trying to be an entrepreneur, you can learn so much from the internet. You literally have this depository of information inside of your pocket. You just have to be willing to put in the work to find the things that you're looking for.” And, you aren’t just limited to the internet to learn more about your business. Any resource that you have available to you, such as entrepreneur centers, other founders, and so forth, is a valuable educational tool that can and should be used.

One final lesson they learned when first starting Mixtroz — investing in an experienced attorney to complete legal obligations such as trademark registration, business formation, and licensing is crucial. “You have to do what you need to do for where your business is, but that [trademark registration] is not an area where you want to skimp because as your business starts to grow, it's going to be a pain to have to go back and clean all those items up when you could have done them clean from the beginning.”

In 2020, the networking and event industry pivoted to meet the rapid demand for virtual networking. Going back to in-person networking and community events will inevitably shake up the industry once again. With in-person events slowly making their way back into the mainstream, Ammons anticipates an industry shift, “I think that people will go back to gathering in person because it's what we know. I think people have been cooped up for too long. People are sick of sitting on Zoom.”

However, Ammons sees this subtle shift back to in-person events, in addition to newly popularized virtual networking, as an opportunity, “Can you deliver a great experience online? Yes, you can. Can you reach a broader audience [by] having an online component? Yes, you can. Therefore, I think things are now and forever going to be this hybrid model. And that's great because I now have a product that can service both sides of the market.” And we can’t wait to see what these entrepreneurs have in store for the future of networking.