Xayn, like Google search, started in the academic world. Google’s co-founders famously created the fundamentals of their search engine in the late 1990s at Stanford University.

”Xayn is a project that started in academia six years ago and has since turned into a full-fledged mission to protect users across the globe, giving them control of their most valuable information,” said Lundbæk.

Before starting the company, Lundbæk developed expertise in algorithms and applications for privacy-preserving artificial intelligence (AI).

Recruiting additional AI talent is an important priority for the company. “We’re always on the lookout for talented AI experts. Right now, we’re especially looking for people qualified in using the programming language Rust, as well as designers who can support us.”

At its core, Google earns most of its revenue through advertising. In 2019, the company earned $134 billion from advertising (i.e., 83% of its total revenue from advertising). Rather than attempt to compete directly, Xayn has a different business approach to the market.

“Xayn’s business model is similar to that of Zoom. As a first step, we’ve launched the free app for individual users. In the second step, we’ll include premium features, such as being able to search through documents that you've saved in a cloud. We’re also working on a version for businesses and corporations with additional functionalities,” said Lundbæk.

In 2020, Zoom reported over 300 million active users. However, only a small fraction of those users generated revenue. In the third fiscal quarter that ended October 31, 2020, Zoom had “approximately 433,700 customers with more than 10 employees” and $777.2 million in quarterly revenue. Attracting a large number of free users and then upselling them to paid accounts can work, but Zoom shows that free users tend to outnumber free users significantly. 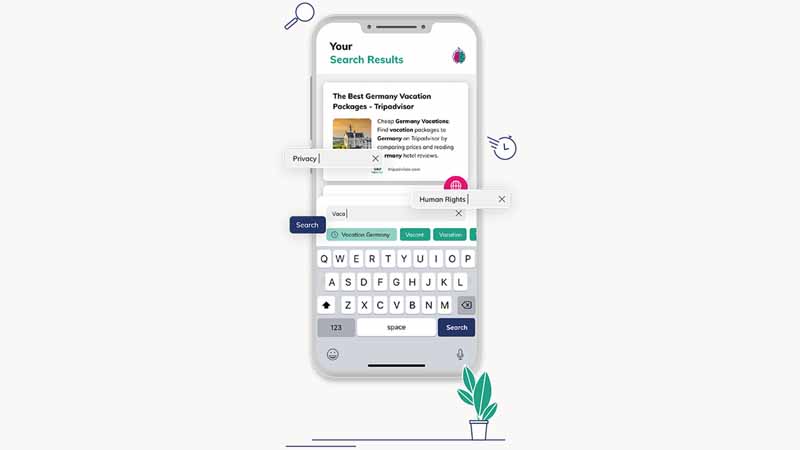 Xayn’s approach to AI sets it apart from other businesses. “The Xayn app includes a toggle switch that allows users to turn the AI personalization on or off, depending on their search needs,” added Lundbæk.

The startup company has also faced technical challenges with AI. “In 2020, we faced the challenge of minimizing a highly-complex AI architecture to fit onto a mobile device,” said Xayn. Despite running AI on a user’s phone, the system still offers significant functionality.

“Usage data never leaves the user’s device, and nothing gets returned to the company. Using a process called federated machine learning, Xayn trains its search AI to deliver relevant, personalized results, on the device itself, without transferring the data.”

Bruce Harpham is an author and marketing consultant based in Canada. His first book "Project Managers At Work" shared real-world success lessons from NASA, Google, and other organizations. His articles have been published in CIO.com, InfoWorld, Canadian Business, and other organizations. Visit BruceHarpham.com for articles, interviews with tech leaders, and updates on future books.