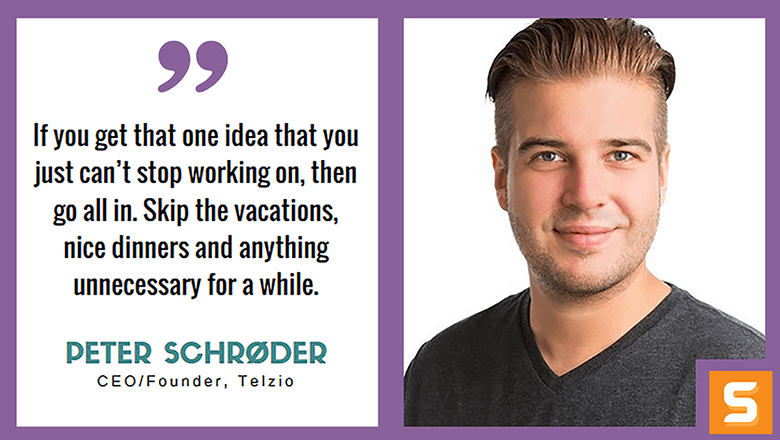 Peter Schrøder, Founder of Telzio, is a Danish web developer with 25 years of programming and design experience. Born and raised in northern Denmark, Peter currently lives in Los Angeles.

Peter launched his first website in 1998 (only 14 years old), which grew to become the biggest artist forum in Denmark. He sold the site in 2002 and has worked as a high level developer for the most prominent IT and media corporations in Scandinavia.

In this interview, Peter shares his experience moving from Denmark to California, primarily to pursue love but later developing a software to solve a global issue. He also talks about disappointments, the mistakes he made and what made him a successful entrepreneur at the end of the day.

For entrepreneurs starting a business in California, his top advice is:

1.) Find two or three advisors with experience in your field of business, 2.) Get an attorney you can trust, and 3.) Buy a fileserver and a document scanner.

Why did you start Telzio? Can you tell me a little bit about your business and what you do?

Like all good projects, Telzio was created out of need. At the time, I was living in Denmark (where I was born and raised), and was working on another project, for which I needed a phone system with multiple international phone numbers. I couldn’t find anything sufficient, so I started coding one myself. To make things easier to manage, I made a web interface for it, and that was the first early version of Telzio.

At the time, I was a professional DJ, playing all over the world, and after meeting a cute girl on a trip to Las Vegas I had decided to apply for a work visa, so I could move to the US and be with her. So I sold all my stuff in Copenhagen and was living with my dad in northern Denmark – during the harshest winter in years.

I was isolated and had nothing to do for almost four months, so I spent all my time coding on this new Telzio project. In the beginning of May, when my visa finally arrived, I packed two bags and traveled to LA with a beta ready to launch.

Since then, Telzio has grown into a full-featured business phone solution, capable of competing with all the largest players in the industry.

'In the beginning there’s no such thing as a balance – and I don’t believe there should be.'

Is there a competitive advantage that you have over the rest? How did you find it and ‘niche down’?

Even though I’m very much against people using “I don’t know anything about the industry” as an advantage (I think it’s mostly an excuse), I actually think this helped us at Telzio. None of our founding members had prior experience in telecom, so we designed a solution that’s intuitive for the end user and doesn’t require programming by a telecom-veteran-IT-consultant for large sums of money. Our focus on simplifying the user experience is one of the keys to our success.

We started out by differentiating ourselves from competition by creating a unique pay-for-what-you-use model (versus pay-per-user) to provide our customers with the most efficient pricing. Besides that, we’re one of the only companies that offer phone numbers all over the world, which is appealing to companies with international presence.

Finally, all of our developers have a significant amount of experience running high-capacity services. We are a team of developers from “Danmarks Radio” (BBC of Denmark) where our backend developer created a streaming platform which is now handling more traffic than Netflix in Scandinavia. This experience has resulted in exceptional uptime and call quality on our system, which is one of the main reasons our customers switch, and stay with us.

How do you balance life and work to remain connected and available for your loved ones? Any advice for me?

In the beginning there’s no such thing as a balance – and I don’t believe there should be. If you want to be an entrepreneur, you must be ready to make some big sacrifices.

No one has ever built a large company by working from 9 to 5. With that said, I have gotten much better at taking the weekends off over the past year – but for the first 3 years of the company’s life, it was 7 days a week – early morning to late night.

'For me personally, one of the biggest factors is the motivation to prove people wrong.'

For me personally, one of the biggest factors is the motivation to prove people wrong. I can’t count how many people have told me that what we were doing was a bad idea, and that it was too big of an industry to go up against. Every time I heard that, it only fired up my will to prove them wrong.

How did you find the time and money to get Telzio off the ground? Any advice for entrepreneurs with minimal time or resources?

When we first started Telzio, we put everything we owned into the project. My wife even cashed in her IRA. From time to time, I took some contract programming work, and worked on Telzio at night while my wife manned the phones during the day.

It was hard, but the feeling when we could finally pay ourselves a salary was incredible. It sounds cliché, but my advice – if you get that one idea that you just can’t stop working on, then go all in. Skip the vacations, nice dinners and anything unnecessary for a while.

Then find out what motivates you – is it a nice house that you want to buy in the future? Is it the ability to send your kids to a nice college? Whatever it is, spend a few minutes thinking about that every week, and keep that in the back of your mind when you’re eating your fiftieth bowl of ramen.

What do you consider the biggest milestone that you have hit with your business? What was the number one thing you did to you get there?

Setting small goals works well for me – I’ve found that it keeps my motivation going and I don’t burn out on the way there.

'Build a relationship with your attorney so he knows your business inside out.'

What was your biggest business mistake and how you did you come out stronger at the end of the day?

Trust is a big issue for me – I always think the best of people, and by moving from a small country like Denmark to the US, I had to adapt.

I come from a place where a person’s word is worth just as much as their signature on a contract. Most of my mistakes have come from trusting the wrong people – from a shady landlord to a potential customer who turned out to be an incredibly talented scam artist.

Every episode has taught me to be more careful, and I have learned from every single one.

Who has been your greatest influence as an entrepreneur? How did they shape your business?

My biggest influence is my old workplace back in Denmark. I used to work for the country’s largest TV network, where we created some incredible online products – but the most important part was the work culture.

We were around 100 people on the online team, and everybody knew each other on a personal level like I’ve never seen before in any company. Every Friday at 3pm, we opened up a beer, and while some people were still coding, others would head over to our Friday bar, where we would hear music, shoot pool, and just hang out - sometimes until late night. This was the best place I ever worked, before starting my own company.

Even though I know that our employees may not stay with us for 20 years, I want them to look back on their time at Telzio, as being the best place they've ever worked.

'No one has ever built a large company by working from 9 to 5.' - @CTOofDOOM

Where do you see Telzio the next 5 years? Any new products in development?

We have several new products in development. The day we stop developing, is the day we should close the company. I can’t talk much about the specific things we’re working on, but we’re aiming to be the most flexible communication platform for businesses in the world.

What are the top 3 pieces of advice that you would give someone starting a business in California? What do they need to know from the beginning?