Perry realized at this point that he wanted to create tech products as more than just a hobby — this was to be his professional calling. Three years later, he started a company that also didn't find success but taught him many lessons and led him to return to the intersection he felt most comfortable with: building technology for small business owners, the people he knew best, the people after his own heart. With this approach in mind, Perry designed Kit, an artificial intelligence (AI) virtual marketing assistant, in 2013 and sold it to Shopify in 2016, and joined the company as Director of Product, Marketing Technology.

But Perry's life changed in a big way when he and his wife had their first child two years ago. He realized that while technology has long been focused on bettering the lives of consumers or companies, no one was applying technology to solve the challenges that parents constantly face. “We've made connecting with people easier, we've made browsing and purchasing easier. Consumer technology has advanced significantly in 20 years. On the flip side, we have this enterprise bucket. We poured trillions of dollars into improving our tooling...to make our 9-5 jobs more efficient and easier, to achieve better and higher output. Somewhere in between these two things is parenting, right? So I took a step back and said, what would parenting look like if we actually built technology not for them to read up on the best thing to feed their baby, but to actually give them the tooling to make buying the best baby food easier, give them the tooling to organize their life more easily, be more collaborative, have cloud, have security, the infrastructure, the platform that we've invested in in every other 9-5 job sector?” 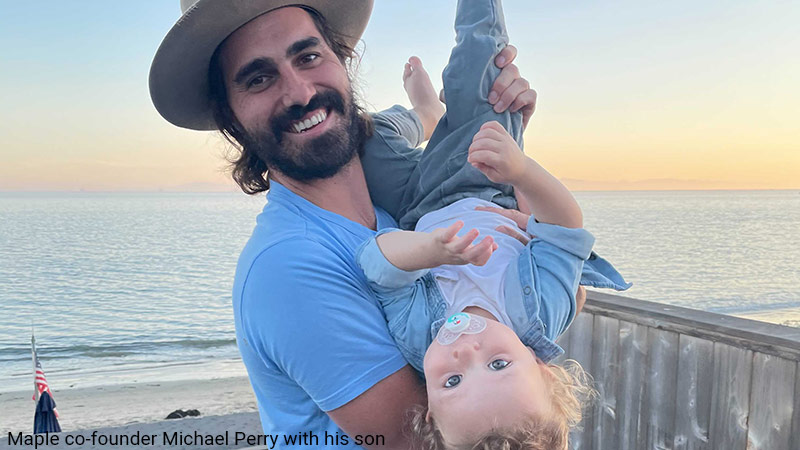 Focused on using tech to ease the timeless burden of organizing the work of parenting, Perry left Shopify in 2020 to return to his entrepreneurial roots and enter the burgeoning family tech space with Maple. Available on Android and iPhone, the app applies AI technology and Google Calendar integration to help parents with children under the age of five distribute childcare and household tasks among themselves and other family members or friends who are added to the account. Launched in beta in February 2021, Maple managed to raise a $3.5 million round of VC funding just seven months after its creation, one of the largest seed investments in the family tech market. Perry also partnered Maple with several companies that offer relevant products and services, so parents can easily and quickly order baby food, for example, directly through the app.

But Perry sees Maple as more than just a way to purchase products and help share childcare duties. While it sounds simple enough, one of the integral features of the app is an end-of-day recap, which allows the user to view the number of tasks completed by every person on the account and to send him/her a note of thanks at the end of the day. The inclusion of this feature is not just a nice-to-have accessory. Perry, a daily user of the app, and his wife, who is five months pregnant, feels that Maple can make a real cultural impact on relationship dynamics.

“I'm learning so much about building a family. It's really incredibly hard. And it's one of these things where people start feeling underappreciated, and you're not seeing all the invisible work or you're not pulling your own weight. Very specifically in the States, most of the workload goes on the mom, and in 80% of the cases, she's not only working a full-time job, she's also running the household. We fundamentally, as a company, do not believe that's fair. We very much believe in a 50/50 partnership of life. We are really playing a cultural role in shifting the way that marriages work.”

Although the family tech sector is rather uncharted territory and is wide open for innovation, Perry is counting on a new generation of tech-hungry parents to drive the growth of this new space. “Parents 10 years from now are going to be using SaaS in every vertical of their life, whether they're paying a subscription for a therapist, for their music, for their Peloton class — everything is going to have some sort of cost associated with it to make their life easier, and they're going to be completely comfortable with and pre-factored into spending. There was a time when someone said that no one would spend $90 a year to meditate, and now Calm is a billion-dollar-plus company, rightfully so.”

Even in its early stage, Maple appears to be making a difference in users' lives. Perry and his team are witnessing the app starting to help its users make small changes. “What we've learned is that creating exposure of the invisible work means that it gives people power because knowledge is power.”

Alongside its goal of improving the lives of parents, Maple is also trying to pave the way for others in the emerging family tech space. By monetizing on its base and proving that “people are willing to pay to simplify their hardest job, then that will be the ceiling that gets cracked for everyone else to use us as an example. We have to get this right for the community. I carry the weight as an entrepreneur to not just make Maple a successful business for Maple, but for Maple to be a successful business for the industry,” says Perry.