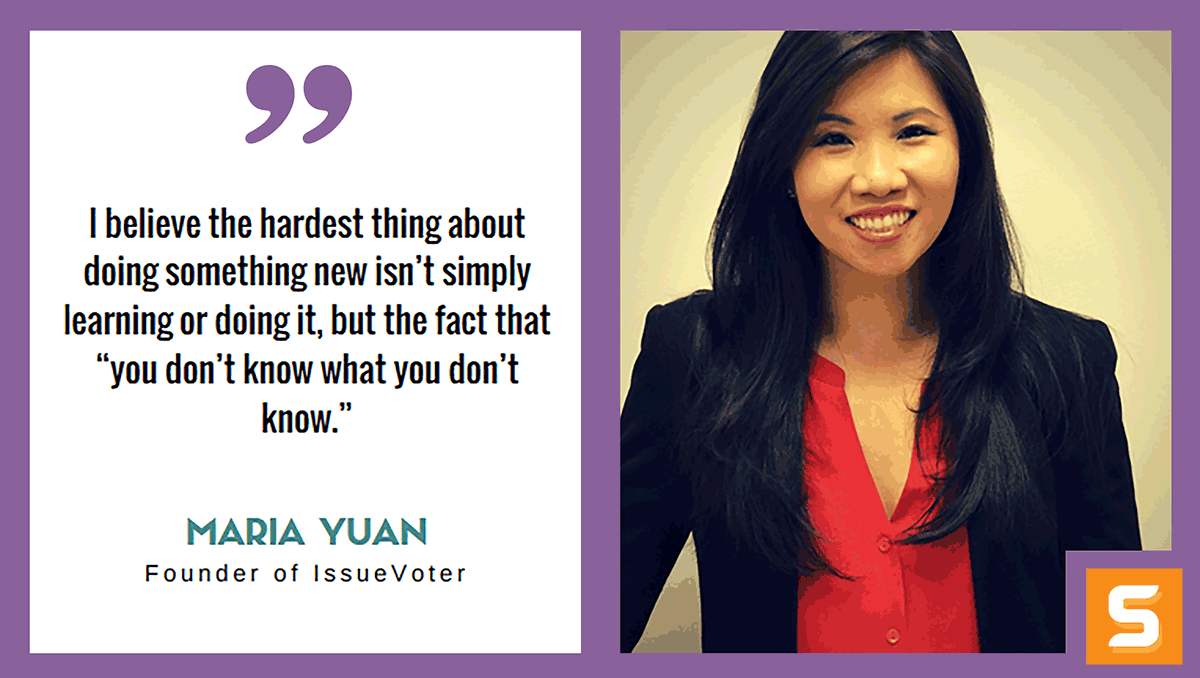 Maria Yuan is the Founder of IssueVoter, a non-partisan platform that helps users make their voice heard in Washington and track how elected officials vote – holding politicians accountable and informing decisions at election time. How awesome is that?!

IssueVoter's mission is to give everyone a voice in our democracy by making civic engagement accessible, impactful, & efficient. IssueVoter launched November 9 – answering the question, “The election is over, now what?” for thousands of Americans – and has been featured in Forbes, Fast Company, MTV, & more.

In this interview with Startup Savant, Maria lets us into her a world a bit, shares some of her core thoughts on advocacy and gives us some of her secret entrepreneurial sauce. Enjoy!

Can you tell us a little bit about yourself, Maria and how you got the idea for IssueVoter?

Growing up in the Bay Area and Austin, I didn’t initially consider a career in politics, but from a young age voting was always emphasized by my parents. I remember mock-voting in second grade and saw it as one’s personal responsibility.

In college, I had first-hand experience with our State reps as part of a small group of students who lobbied the Texas Legislature to introduce and pass a bill creating the first student seat on the University of Texas System’s Board of Regents. I also served as an intern for a Rep, where I saw first-hand that Representatives really do track every constituent contact, yet such a small percentage of us actually reach out.

After graduating from UT-Austin (Hook’em!) where I majored in Finance, I worked at JPMorgan in Investment Banking. After a few years at JPMorgan, I took a leave of absence to manage one of the most targeted races in Iowa: an open seat in a swing district that many hoped would turn the “25D-25R” even-split in the State Senate. And that’s where I first envisioned the idea for IssueVoter.

I distinctly remember sitting in the office on my laptop and thinking, “There’s so much focus on elections, but there should be an easy way to track what our reps are doing throughout the year when the work that impacts our lives gets done." And thinking, “Someday, technology will get there. Someone will create this and I'll be able to use it!” I didn’t expect that someone to be me.

What are your visions for your business? Where do you see it in the next 5 years?

Our mission is to give everyone a voice in our democracy by using technology to make civic engagement accessible, efficient, and impactful.

In 5 years, I hope that because people have used IssueVoter, they (1) will see and understand the work that happens throughout the year (passing legislation) that affects our lives, and (2) realize the importance of voting for reps who truly represent us. In 2018, voter turnout will not have been at an all-time-low like it was in 2014, the last mid-term elections. And we’ll have seen increased voter turnout in 2020, the next presidential election.

What makes IssueVoter unique from others? How did you find your competitive advantage?

From a young age, I was taught not to quit; I’m determined. Also, I believe the hardest thing about doing something new isn’t simply learning or doing it, but the fact that “you don’t know what you don’t know.” I’m a connector, so I overcame this by having lots of conversations with people from a variety of sectors and skillsets.

'From a young age, I was taught not to quit; I’m determined.' - @MYDaysAndNights

What was your biggest business mistake and how you did you come out stronger at the end of the day?

The costliest mistakes so far relate to paying people who didn’t deliver. I won’t go into details, but on the flip side, this past summer I had a college intern who was absolutely amazing - better than many people I’ve worked with who've graduated with years of work experience.

As a business owner, what's your greatest fear and how do you keep it under control or harness it?

I'll share a personal fear. Most business-related fears you hear are things like, “I won’t be able to pay my employees,” or “Competitors are going to take market share,” which are definitely legitimate, but I hope a personal one is more engaging and universal.

It’s the fear of rejection. Mine is not non-existent, but it’s not so great that it prevented me from putting asks out there. The main thing to remember is to separate yourself from your business and never take anything personally. As a Founder, this can be hard, but you have to put hundreds of asks out there, so there’s bound to be rejection.

'The main thing to remember is to separate yourself from your business.' - @MYDaysAndNights

How do you stay focused on a day-to-day basis? Do you have a key motivator?

I'm not a morning person, and in the past, reading productivity tips about CEOs waking up at 5am used to make me think that I should do the same. In 2016, I decided that I could ignore that advice. However, in 2017, I’m actually going to give it a try. I've also learned that the typical “workout first thing in the morning” isn't for me.

It takes away from time when I’m really focused and productive: shortly after I wake up in the morning and afternoon/early evening. I take my dog Cotton out 3 times a day, which helps force me to get fresh air and get a change of scenery.

What advice would you give to our readers who want to start a business in NYC?

'Listen to and trust your gut.' - @MYDaysAndNights

IssueVoter provides a sample lesson plan for teachers at any grade level to use IssueVoter as a resource in their classrooms. For a free copy email info@issuevoter.org.