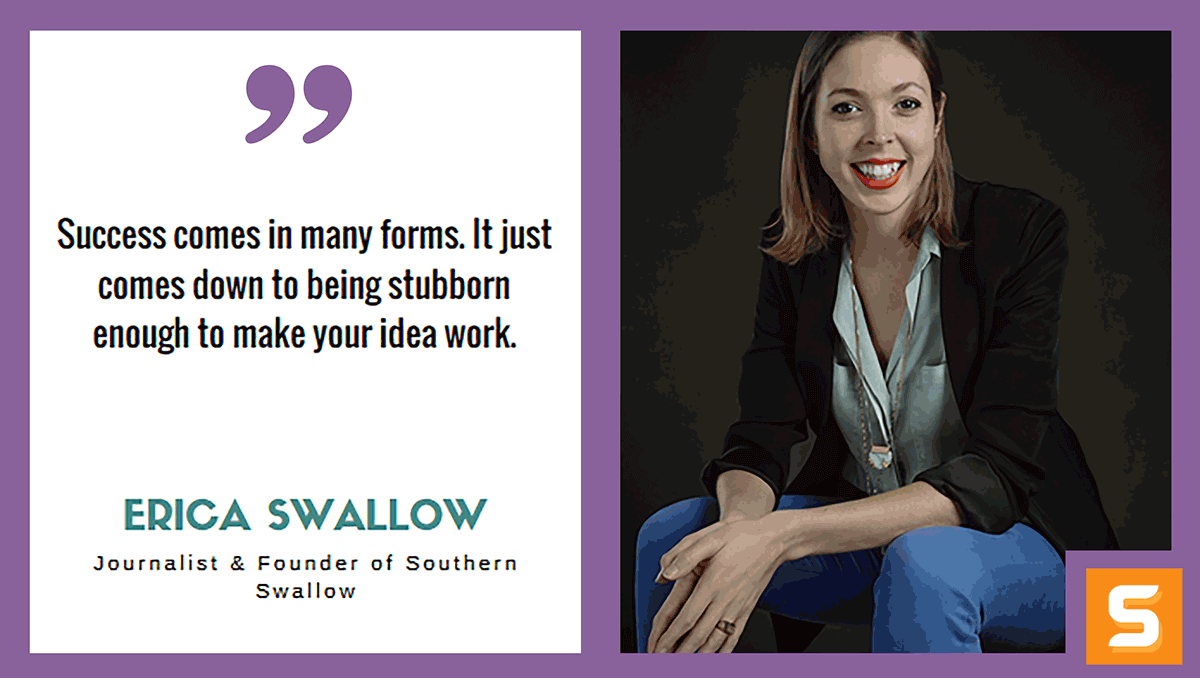 Erica Swallow is a status-quo-wrecker and founder of Southern Swallow digital strategy consultancy. She works with corporate, startup, and public sector clients to help them communicate their visions effectively on the web.

Alongside her consulting work, Erica enjoys discovering and telling stories worth knowing through her writings in Forbes, Fortune, and The Wall Street Journal, among other publications. She also makes it a point to share and consume good content and has spoken at SXSW, Web Summit, and Lean Startup Conference, among other notable forums.

In this interview, Erica shares what it's been like to apprentice for a giant publication company in New York, eventually found her digital consultancy company, and earn the trust of large corporations. Enjoy

Okay, so Erica, at what point did you realize you’re really on to something?

I knew I was on to something with my digital consultancy Southern Swallow two years after founding it. I started the company in 2009, after graduating college and taking on my first client: The New York Times. To be honest, I started it out of necessity. The Times wasn’t in a position to hire a full-time social media marketing manager, so I settled as a consultant. What seemed like a trade-off was actually a blessing in disguise.

In 2010, I put Southern Swallow digital work to the side to take on an editorial role at tech publication Mashable. After an amazing experience with the company, managing and growing its supported content program, I decided to go full-time on Southern Swallow. Immediately out of the gate, I had a lineup of clients, waiting to work with me. That’s how I knew I was onto something.

'Entrepreneurs are passionate about their work & unwilling to give up when times get tough.'

Where did you draw your competitive edge from initially?

Competitively, Southern Swallow’s edge lies at the intersection of great content and technical skills. Our strength in content takes its roots from my experiences at The New York Times and Mashable, as well as as a contributor at Forbes, Entrepreneur, The Wall Street Journal, and a number of other publications. Unlike other agencies, Southern Swallow has on-staff insights learned from the greatest publishers in the world.

Secondly, because I work with freelance developers, designers, and other technical consultants, Southern Swallow has a strength in tech unlike many other agencies. We’re able to conform to the needs of each client by sourcing the right individual talents for a given project.

Combining great content with technical skills, we’re able to offer content strategy, web and mobile design, and digital marketing services that are unmatched by our competitors.

To date, other than yourself who or what has been Southern Swallow’s greatest asset?

Southern Swallow’s greatest asset to date is our community: our mentors, our clients, and the freelancers we consult with. From day one, the majority of our business has come from word of mouth. Arguably, it all started with encouragement from my mentor, Soraya Darabi.

Prior to consulting with The New York Times, I was a social media intern there, and Soraya was my supervisor. When she left, I essentially took her position as a consultant, which was the birth of Southern Swallow. She left to work on a couple of startup projects and is currently the founder of Zady, a mission-driven brand that sells clothing and accessories with known beginnings. Soraya encouraged me to take clients early on and was one of my first real advocates, sending business my way when she heard of relevant projects.

Beyond Soraya’s tremendous generosity and guidance, Southern Swallow’s clients became a second source of further recommendations. In fact, it’s almost embarrassing to say, but we didn’t have a website until 2016, because we had too much on our plate! As a design agency, it’s funny looking back thinking we didn’t build our site until seven years after we opened up shop. The reason, though, is because word of mouth and our reputation is so strong that it was really a nice-to-have.

Finally, I have to give a major shout out to all of the freelancers we work with. From developers to designers and marketers, our freelancers are the best on the market. I work hard to source the most talented consultants for Southern Swallow projects and match the client and talent as closely as possible. It’s one of my favorite parts of our work, in fact.

'You have a finite amount of time to succeed; therefore, you can’t do everything.'- @ericaswallow

As an entrepreneur, what are your top three strongest character traits?

Vision, determination, and the ability to say no – I believe these are the three characteristics that make any entrepreneur successful. To break it down:

What advice would you give to new startups facing funding issues?

Luckily, Southern Swallow isn’t a capital intensive business. Agencies are human intensive by nature – if I want to scale, I need to bring on more teammates to help manage clients.

For startups that are capital intensive, though, I understand how funding can be an issue. My funding experience comes in the form of limited experience as a venture capitalist. Over a year as a student partner at Rough Draft Ventures and a summer associate at General Catalyst Partners, I learned that the biggest factor for predicting fundworthiness is the team. Do you have the right team for solving the problem you’ve presented?

That comes in the form of their background, previous founding experience, and current role on your team. Get your team right and showcase how they are the best people on the planet to solve the problem you all are tackling.

What major challenge/milestone is Southern Swallow working towards right now?

Last year, we pulled on our first international client – Oola Sportswear, a modest activewear upstart based out of Doha, Qatar. For seven years, we had operated solely in the United States; after attending MIT Sloan School of Management, I met Oola’s future co-founder and CEO (and fellow classmate) Haya Al Ghanim. Haya found us after we launched our website, and I’m proud to have a brand like Oola in our portfolio, especially as our first international client.

That being said, we’d like to further our international footprint. One challenge we encountered while working with Oola was the inability to create content in the two languages its customers speak: English and Arabic. We’ve got the English down, and now I’m interested in growing our strength in multilingual marketing. The Oola community is active across the brand’s website and social media channels in both languages, so it poses a real challenge for our firm to not speak both while representing Oola.

That being said, we have to be strategic with what language(s) we choose to hone in on. I do believe, though, if we don’t think about the importance of creating content in other languages, we may lose out to other agencies that have that capability. This is a mistake American firms make all too often.

How did you overcome your biggest life/work balance mistake thus far?

Work/life balance was the biggest challenge right out of the gate. When I went full-time with Southern Swallow in late 2011, I had a number of clients lined up with multiple projects in the pipeline on day one.

What I didn’t have, though, was a plan for how I’d keep my friendships alive. I was living in a 300-square-foot studio in the Upper East Side of New York City, and I would spend days in my apartment, chugging away on projects. Weeks would go by and I wouldn’t see my closest friends.

I finally started to hit a wall when I realized that I was being left out of social plans. I had rejected enough party and dinner invites that my friends just started assuming that I was busy. After having what I called at the time a “quarter-life crisis,” I wrote a long journal entry answering three questions:

Unexpectedly, that journal entry guided the next few years of my life, as I worked towards having greater balance between my work and social lives. I’d suggest founders consider the same approach before they hit a wall. Prioritization, as I mentioned before, is one the biggest strengths a founder can have.

Do you believe there’s a pattern or formula to modern business success?

No. Success comes in many forms. It just comes down to being stubborn enough to make your idea work.

'Success comes in many forms. It just comes down to being stubborn enough to make your idea work.'

If the Southern Swallow brand had theme music, what would it sound like?

Ha! I love this question. If Southern Swallow had its own theme music, it would play off of the name. I’m from Arkansas, and my last name is Swallow. I’ve always had an affinity for swallows, the tiny bird with a forked tail. If we had a theme song, it’d probably take inspiration from the swallow’s chirpy, clicky song and country music, as a homage to my home. [editor: sounds awesome Erica!}

What advice you got for folks considering setting up shop in Arkansas?

Though I grew up in Arkansas, Southern Swallow was originally founded in New York, where I went to college and lived for eight years following graduation. The company has, though, been incorporated in Massachusetts and Arkansas, along with New York, so I can speak to business life in Arkansas, where I now reside…

My advice for aspiring Arkansas entrepreneurs is to reach out to the startup community in your area. Whether you’re in Northwest, Northeast, Central, or Southern Arkansas, there are resources nearby that you can take advantage of.

Beyond the official organizations, I suggest reaching out to entrepreneurs and mentor figures in your area to get their insights into what worked for them. Whether you’re in New York or Arkansas – Central Arkansas or Southern – it’s the people around you who are going to make the biggest difference for your business. Spend time getting to know your community, and you’ll figure out the rest!

'Spend time getting to know your community, and you’ll figure out the rest!'