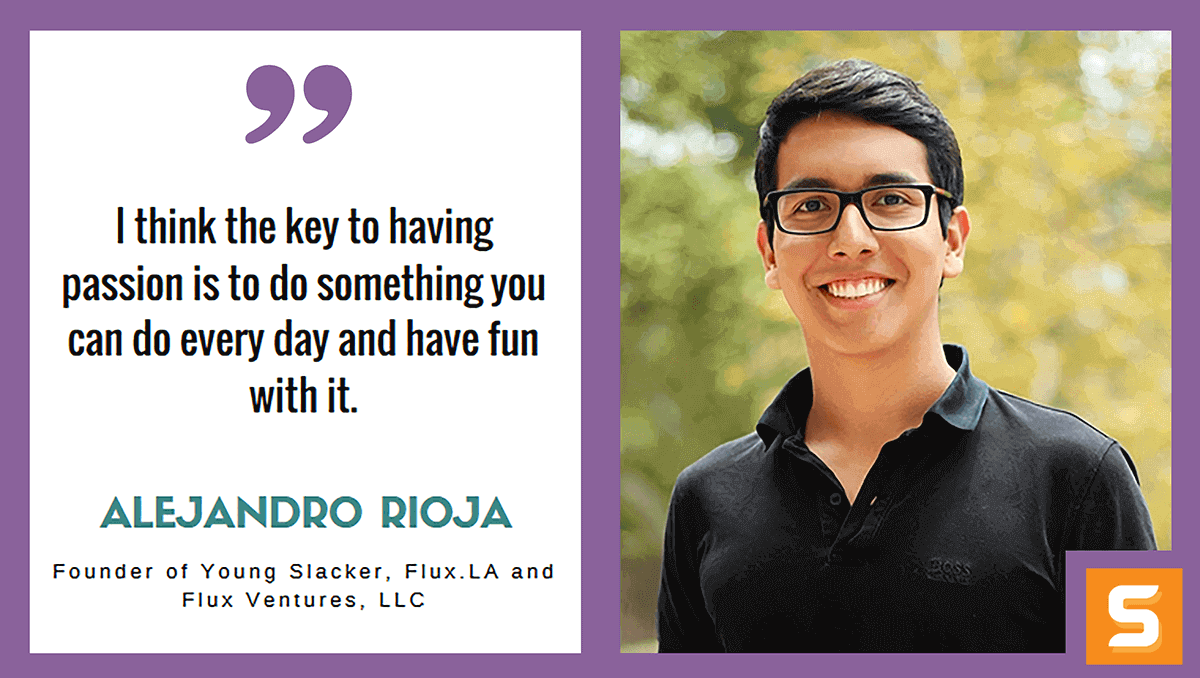 Alejandro Rioja is an entrepreneur from Bolivia, about to graduate from UCLA with a Computer Science degree. He started Flux Ventures, a holdings company that owns Flux Chargers, the #1 rated portable charger selling in over 75 countries; Flux.LA, a killer web design and SEO agency; and Flux Capital, a Venture Capital firm that invests in early stage companies like Everipedia (val. $22M).

Moreover, he has a hilarious and profitable snapchat channel, Young Slacker, where he amassed thousands of followers due to the unique and eccentric stories he creates.

In this interview, Alejandro tells us a bit about his life as a young hustler and multi-passionate entrepreneur, and shares some insight into how he tackles issues like funding and hiring the best fits for any team. Enjoy!

So, Alejandro what made you take the leap and found Young Slacker and Flux Chargers?

I always wanted to be an entrepreneur because I just can’t stand not pursuing my dreams. For me, there’s nothing more rewarding than working on something of my own.

Even before I started Flux or Young Slacker, I had a few projects (freelancing, another startup and coding projects) that I felt very strongly about and that I couldn't see myself not pursuing.

The more I worked on my independent projects, the more I realized that I didn’t want to work for someone and that the corporate 9-5 ladder wasn’t quite for me. Since I was young, I wanted to create my own path. So I did.

'For me, there’s nothing more rewarding than working on something of my own.' - @RiojaAlejandro

How did/do you go about finding the best people for your team?

The best people are those that naturally gravitate towards you and those that you can work well with.

Whether through personal connections or people that work in your industry, having someone in your company that you share interests with (outside of just work) is very important.

I met my co-founder Miles Anthony when I was a freshman in college and we’ve been good friends for almost 4 years now. Having trust in your co-founder and being able to get along is important as you'll spend a lot of time together and you want to spend that time working, not fighting.

Our first hire, Kate Anoufrieva, was quick to reply to our hiring post on a Facebook group because she said she “believed in our product”. We valued this a lot.

Max Bronstein was one of Miles’ friends and he first reached out to us because he was excited about what we were doing and saw his design skills and hustle being a great fit to our culture.

Our team’s skills and personalities complement each other well as we don’t have any repeating majors in the company. We have Computer Science, Political Science, Math and Business/Economics. Each of us contributes differently, but we all share the same vision.

When hiring for a small startup, I think it's also very important to offer people a test period where together you can see if your company is the best fit. Some people may be very qualified for the job but sometimes don’t fit into the company culture. At Flux, we went through about 15 people until we found our core team.

'The best people are those that naturally gravitate towards you and those that you can work well with.'

Without too many specifics, how did you tackle the funding issue?

Actually, Flux Ventures is completely self-funded (with the exception of a no-equity grant we received from StartupUCLA).

My co-founder Miles and I decided to invest our savings and retain as much power in the company as possible. Nevertheless, we might pursue an Angel round soon to grow faster. My friend Sameer from Twazer described very well how to go about funding when he explained how he got a Shark to invest in his company.

What are your Top 3 defining traits as an entrepreneur Alejandro?

I would consider myself driven, optimistic and open.

In my opinion, there's no point of being an entrepreneur if you’re not fired up by the future. You can’t be driven if you’re not hopeful that your work will make an impact. (At least I can’t).

Moreover, I think being open is important as a leader because you can’t learn if you’re closed off. At any Flux meeting, I like to hear the perspectives of the team and use their opinions to make a decision. Sometimes what they're thinking is better than what I had originally planned.

'I think being open is important as a leader because you can’t learn if you’re closed off.'

What’s been the most fantastic moment for Young Slacker and Flux Chargers so far?

That might sound romanticized and all but it's true. I think the key to having passion is to do something you can do every day and have fun with it.

With Young Slacker, I primarily post stories that entertain me and that would make me laugh. Every day is BAUS (a lifestyle philosophy based on incremental in the pursuit of success and happiness). I'm grateful I've been able to work with brands like Nike, Tenzo Tea and MajorKeys.

Regarding Flux, I actually have two favorite moments. One of them is during the early days of the company when I used to go to streets in Santa Monica to sell my product face-to-face. Being exposed to raw customer feedback at the beach was a great learning exercise (and a very tough one, too). There was nothing more fulfilling than starting a conversation with a complete stranger and closing a deal while pulling out my Square reader.

The second moment and the turning point for our company was when we received a #1 worldwide rank By Yahoo Tech. Interestingly enough, we didn’t even celebrate that day, we kept working on getting more reviews and more traffic like nothing happened.

'I think the key to having passion is to do something you can do every day and have fun with it.'

How was your initial customer base formed, and how do you keep it growing?

Young Slacker is a project that I kinda fell into. I actually joined the snapchat game very late (mid 2015) and for a few months wasn’t using the platform for anything other than just leisure.

For quite a while, I was simply using snapchat like everyone else, just to stay in touch with my friends.

I also started posting my raps and other type of content on my Story. I saw that my friends interacted with my story, either by taking a screenshot of it or by sending me a DM about it. I figured that if my friends liked what I was posting, I could broaden my scope and try to appeal to friends of friends. So, I created more stories. I started shouting people out. This attracted a few more followers.

The fact that I had a branded username (@youngslacker) helped too, because it helped create network effects.

But what really made the breakthrough on my account was when I started interacting with my followers by letting them ask me questions and send me story requests. People loved asking me absurd questions and random word rap requests.

The first customers for Flux Chargers were found in the streets of Santa Monica (more specifically, at the Third Street Promenade and the Santa Monica Pier) as I mentioned before. When we first launched the original Flux Charger, I got a box full of chargers and went to Santa Monica to try and sell them.

Our first couple of e-commerce customers were found through a bit of SEO and clever social media marketing on our Facebook page. Logically, I also used the Young Slacker followers as a starting customer base. One of the snapchat stories that people liked a lot (and still remember) is when I threw a Flux Charger out of my apartment window on the 3rd floor to show its drop resisting capabilities.

If your brand had a role model, who would it be and why?

Definitely Richard Branson. In fact, our holdings company Flux Ventures is largely trying to emulate the principles of the Virgin Group.

I really admire Richard Branson (among other entrepreneurs like Peter Thiel, Elon Musk, Brian Tracy) for his ability to disrupt industries and create a powerful worldwide-recognized brand. I hope to do the same soon.

To date, what’s the biggest mistake Young Slacker and Flux Chargers has overcome?

I think the biggest mistake in anything is to become complacent.

At some point with Young Slacker, I stopped producing good content and was posting less often. People weren't entertained as much (maybe because they were now holding my stories to a higher standard) and engagement numbers dropped. I had to rethink my strategy and get back on track with quality content.

With Flux Chargers, since growth was so unpredictable, we weren't fully prepared when we went viral. Our inventory was running low and our supply chain logistics weren't optimized. We struggled for a couple months with low cash and low inventory. We eventually solved this problem but we could have done that so much quicker. We learned the lesson (which cost us a lot of sales) and we're now fully cushioned with inventory.

'I think the biggest mistake in anything is to become complacent.' - @RiojaAlejandro

How are you mastering the art of life/work balance?!

I wouldn’t say I’ve mastered it but the key to having a balance is to create your life around what you like doing best.

In my case, I love working. I'm a workaholic. I feel bad when not working. I don’t go out often (only 1-2 times per month). For me, this is completely fine because of who I am and my personality. For other people it might be different.

If you love working is it really “work”? For me, it isn’t. It's part of my life.

Nevertheless, I do consciously make an effort to take a few hours of the day (usually during meals and at night) to unwind (which for me is freestyling some raps), hang out with friends or my girlfriend. This is important to keep my sanity and not burn out.

'The key to having a balance is to create your life around what you like doing best.'

What advice you got for someone interested in starting a biz in California?

California is probably the best place in the world to start a business! Specially a tech-related one.

LA and SF right now are being flocked by talented people from all over the world that have so many multi-cultural backgrounds. With so many people trying to make their dream become a reality, it is hard not to get excited and try to start one on your own. Additionally, the funding in Silicon Valley is abundant right now.

Just take a leap of faith and go after your dreams!