On a global scale, society is reimagining everyday processes to prioritize more sustainable alternatives to conventional practices. The construction industry is no exception, and the question being posed is how we can make man-made construction better for the environment. Eco-friendly startup Hempitecture, founded by Matthew “Mattie” Meade and Tommy Gibbons, might just have the answer.

Hempitecture manufacturers and distributes building materials that aren’t made from conventional substances. Instead, this startup uses industrial hemp as the base for its greenified building materials to provide an alternative that is far more sustainable than its traditional counterparts. “We're a public benefit corporation that specializes in what we believe are the most truly sustainable materials [and building materials] on the planet,” says co-founder Matthew Meade.

But, getting to where they are now wasn’t always easy. With hemp being newly legalized for commercial use and production, this innovative startup has had to overcome not only the obstacles of the burgeoning hemp industry but also rapidly increasing demand for sustainable products. 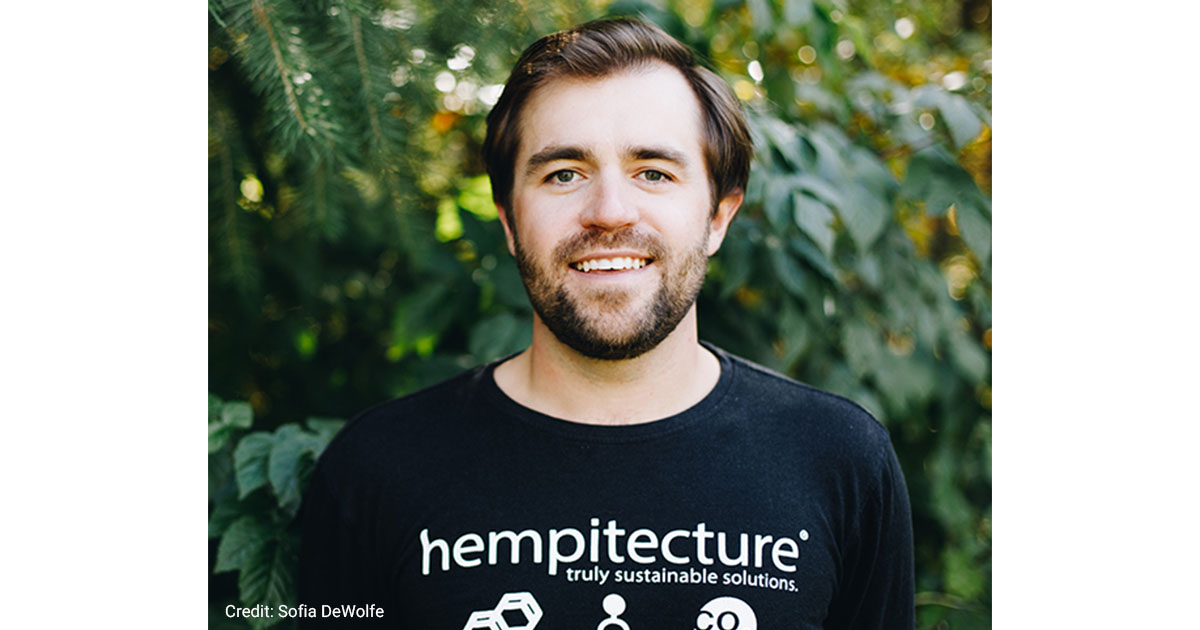 Building a Business Out of Hemp

“[T]he sort of story of Hempitecture is ever-evolving and really began when I was an undergraduate student studying architecture and environmental sciences.” Meade explained during our interview, “I just became interested in this problem that I learned about — the built environment. And that problem is that the built environment is responsible for 40% or so of our carbon footprint and 40% of our energy consumption.”

The “built environment” refers to man-made structures created for humans, by humans. Much of the built environment is traditionally created with conventional materials such as steel, wood, concrete, and fiberglass. However, as the demand for sustainable alternatives to these and other materials grows, startups like Hempitecture have stepped up to the plate.

Despite attending high school together, Meade and his co-founder, Tommy Gibbons, boast a different set of career experience and skillset. “He graduated from Princeton and found a career in institutional banking unfulfilling,” Meade says. “We joined together to bring my background of architecture and sustainability together with his background in finance and startups.”

As a student, Meade was able to research available building materials and methodologies that could be used as an alternative to conventional building materials. Specifically, as Meade says, “Materials that are made with earthen materials that can store carbon dioxide and are rapidly renewable.” It was with this mindset that Meade thought to develop and scale hemp-based insulation products — the foundation on which Hempitecture is built upon.

“I started looking at ways that we could solve that problem using materials that stored carbon dioxide or were less CO2 heavy [and] had less embodied energy to go into them. And that was when I found out about a building method primarily used in Europe called a ‘hemp lime’ or hempcrete, that uses a combination of the wooden core of the hemp stock and lime. And [I] thought ‘Wow, what an incredible opportunity that we're missing here.’”

Their flagship product, HempWool®, is insulation created as an alternative to conventional insulation, which is typically made of an even mixture of plant-based material and plastics/chemicals that can be damaging to the environment. “HempWool® is a 90% hemp fiber batt.” Meade explains, “Meaning it's all-natural and non-toxic, which ultimately lends to healthier homes and more energy saved in your home because our materials [are] high-performing and also carbon neutral.”

Being carbon neutral is another major sustainability feat; essentially, carbon-neutral signifies that all carbon dioxide produced by the startup is being offset through other means. With some of the largest companies in the world working towards this accreditation, carbon offsets are a tremendous step towards a sustainable future — something Hempitecture is clearly serious about.

As with most startups, building a successful business wasn’t all smooth sailing. For Hempitecture, however, the obstacle wasn’t isolated to common issues like finding a target market or generating funding.

The hemp industry is still relatively new even today, with legality and production being the main issues facing companies of this nature. Meade recalls that during the time Hempitecture was founded, “Hemp was illegal when I started the business. We imported hemp building materials to build some of our first projects. It was a huge barrier, but we crossed the barrier.”

While commodity production of hemp has been legal in the US since the passing of the 2018 Farm Bill, there are still obstacles to overcome in this young industry, “There is maturity to be had within the hemp industry that we have not yet seen. Farmers are learning how to cultivate this new commodity,” Meade says. “We're learning how to harvest it. We're also learning how to process it and then turn it into other materials. So, we need to be patient and recognize that it's super early on in this segment of the hemp industry.”

Not only does a strong product and company mission play a part in the startup’s ability to meet these challenges head-on, but the founder’s mentality is also at the forefront of their strategy for success. As Meade puts it, “Failure is necessary. I have failed and been told to give it up, to go a different direction, and persistence through this was required.”

Now, during their initial round of seed funding after being self-funded since the startup’s inception, it would appear that the founder’s resilience paid off, “Don't give up, unless you really need to give up, then pivot instead. Keep the fire alive!”