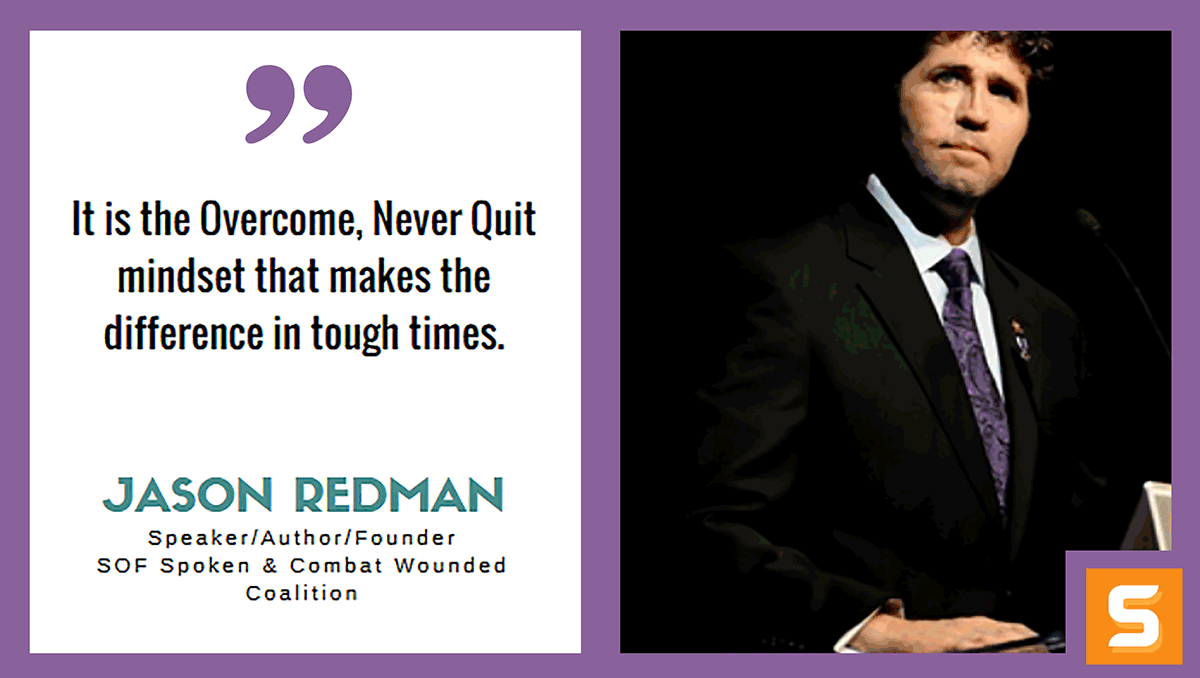 Jason C. Redman is a former U.S. Navy SEAL, Founder and spokesperson of the Combat Wounded Coalition, Founder of SOF Spoken and author of: 'The Trident: The Forging and Reforging of a Navy SEAL Officer'.

In his spare time, he speaks across the country spreading his message of life, inspiration, and shedding light on the sacrifices that enable the Freedoms of our great republic. He has spoken to many great organizations including the Marriott Corporation, the NFL Cincinnati Bengals, ODU Monarchs Football Team, NASCAR, and even had the honor to speak to the US Men’s 2010 Olympic Hockey team prior to their first game.

In this interview, Jason shares his experience as a retired Navy SEAL and how he impacts the lives of not just retired army veterans but civilians and young athletes across the country. He's committed to inspiring and teaching people how to develop an attitude of never giving up, no matter the circumstance.

His advice for entrepreneurs starting a business:

Identify what you are good at, identify what is your competitive advantage, focus on those things and build on them. Then, focus on developing a relentless Overcome Mindset above all else. IT will be hard. Get rid of unnecessary drama. It will drag you down.

Can you tell us a little bit about yourself, Jason and how you got the idea for SOF Spoken?

I grew up in a military family and always wanted to be in the military. Settled on the SEAL Teams about the age of 14 and never looked back. Had a great career and saw the world; the good, the bad and the ugly. Was given amazing opportunities to learn about leadership, teamwork and overcoming adversity through positions as a SEAL operator, instructor, and later as a SEAL officer.

Earned a slot to the Navy’s Seaman to Admiral program which allowed me to get my business management degree through Old Dominion University. A moment of fate with an enemy bullet changed my life forever and made me recognize I got a second chance and I now try to share the lessons I have learned from my military career and that critical moment with others for success.

As a retired navy, when did you know that you had a business on your hands and not just a ‘good idea’? (The ‘Aha!’ moment)

Due to my injuries and the positive overcome mindset I had built around myself, I was being asked to do speaking events for the US Navy and organizations that support us.

As I got more comfortable speaking, I looked back on my career; the achievements, the successes, the mistakes and failures and the incredible people I worked with and realized I had a lot of information to share that translated easily into the civilian world, because they were not military principles, they were human principles.

Thus, the idea to launch a speaking company built around these things was formed. A friend of mine gave me the idea to call it SOF Spoken, a play on words highlighting special operations need to speak softly but carry a big stick.

'If I commit to a company to speak or have a seminar for them, I am there for them 100%.' - @JasonRedmanWW

Besides SOF Spoken, what else do you do as an entrepreneur?

I am definitely a jack of all trades, master of none. I launched a non-profit organization to help wounded warriors called Wounded Wear, which has now evolved into the Combat Wounded Coalition. I am honored to say we have been operating for over eight years now. I have six employees and we have helped thousands of wounded warriors.

I also am working on a screenplay and recently was involved in a film project acting for the first time which was a lot of fun. Lastly, I am passionate about veteran’s rights so I work with another company as a spokesman, Concerned Veterans for America.

What is unique about your business? Is there a competitive advantage that you have over the rest?

One of my competitive advantages is if I commit to a company to speak or have a seminar for them, I am there for them 100%. Many speakers come in, speak and leave immediately, there is no personal touch.

I pride myself on being available for whatever the company needs during my time with them. I want to meet people within their company, learn from them, talk about their issues or even just share stories with them. If the company feels it would be beneficial to come to their event dinner or breakfast, I am there. If a company wants me to come to a VIP event and meet with potential clients, I am there. I see myself as not just a speaker and instructor, I see myself as an advocate and asset for that company and their immediate needs.

Recently, I spoke at a private school and they felt it would be beneficial for me to meet and work out with an early morning athletic club, so there I was at 5:30 AM working out with these amazing motivated student athletes. This is my advantage. I go above and beyond to integrate with their culture and goals during my time with any company, team, or organization that hires me.

'It is the Overcome, Never Quit mindset that makes the difference in tough times.' - @JasonRedmanWW

What do you attribute your success to? Is there a trait you have or a person who helped you along the way?

My success is directly attributed to one thing, an unrelenting Overcome Mindset. This is the core of what I speak on and the primary focus I encourage others to develop. You can be a great leader, team member and planner but eventually, something will always go wrong with those traits.

It is the Overcome, Never Quit mindset that makes the difference in tough times. I have failed, made huge mistakes, had my professional integrity questioned over mistakes, had to climb out of some deep holes I put myself in, and even suffered severe personal injury but my unrelenting Overcome mindset and refusal to quit got me to the other side.

Did you have a hard time starting your business? How did you handle time and resources constraints?

Starting the business was not hard, it is building, sustaining and managing it; balancing time and resources. Like most new businesses, we started out using what we knew and spreadsheets to manage it all.

I am starting to get into filling my entire schedule every night. Managing my time better. Choosing the most important things and putting them into my calendar and not deviating from getting them done, unless it is a true emergency. Second, we have recently started using CRM software to better track with companies and opportunities.

When times get tough, what would you say motivates you to keep going? To not hit the snooze button and to keep fighting for your goals.

I don’t know how to quit. IT is human nature, and even I sometimes get down because something is not going the way I thought it would, but you pick yourself up and figure out another way. You Overcome.

Overcome is a simple word that says, "I will never let adversity defeat me." Whether you go over it, under it, around it, or directly through it, you never stop until you get to the other side. Getting to the other side and not quitting is what drives me because, I know putting one foot in front of the other regardless of the adversity in my path will separate me from 95% of the population.

Quitting is easy. 95% of the world will quit when it gets too hard or uncomfortable. To keep going in the face of extreme storms is the key.

'Quitting is easy. 95% of the world will quit when it gets too hard or uncomfortable.' - @JasonRedmanWW

Is there a type of marketing that has worked amazingly for your business? If so, how did you stumble upon it?

We have not put a lot of money into marketing. We have relied on social media and word of mouth and SOF Spoken has grown at a nice manageable pace.

Where can we find you or hear you, Jay?

I can be booked through my website, www.sofspoken.com and I will be launching a new video for sale as a download, my Five Principles of Elite Performers presentation soon.

What are the three best pieces of advice that you would give to anyone starting a business? What do they need to know from the very beginning?

Identify what you are good at, identify what is your competitive advantage, focus on those things and build on them.

Then, focus on developing a relentless Overcome Mindset above all else. IT will be hard. Get rid of unnecessary drama. It will drag you down. You will meet people and problems who will become major obstacles and headaches on your path. The easy thing to do is quit. The harder thing to do is drive forward, put a smile on your face, and figure out how to get to the other side. This mindset is what leads to success.

If you want to know more about Jason and how he developed his Overcome mindset, follow him on Twitter or invite him to speak at Sof Spoken.