While some large corporations are struggling to survive, their plight marking them as “zombie companies,” the number of new businesses continues to grow. More and more Americans are going into business for themselves. What’s driving these contrasting forces? And what effect will they have on the US economy?

Companies Slip Into the Twilight Zone

Zombies, once found only in folklore or movies like “Night of the Living Dead,” have made their way into US corporate territory. Over the past three decades or so, the number of companies that are simply going through the motions has increased. Some are going to the dogs, making scarcely enough to pay their short-term creditors. Their numbers have increased even more since the onset of the pandemic.

A Bloomberg analysis of the country’s 3,000 largest publicly-traded companies found that about a quarter of them — more than 200 — have become “zombie companies” since the coronavirus crisis began, unable to earn even enough to cover interest expenses. The defining characteristic of such firms is that, over an extended period, they are unable to service their debts from current profits. This list of zombie companies includes Boeing, Carnival Corp., the cruise operator, Delta Air Lines, Exxon Mobil Corp., Macy’s, and many other household names.

Zombie companies were first labeled as such by economists looking into Japan’s sudden change in fortunes in the early 1990s. Up until then, the East Asian island nation’s rapid GDP growth, remarkable export prowess, and low unemployment made it the gold standard of economic success. Then, strangely, the economy fell into a prolonged recession that lasted for almost two decades. There was speculation that Japanese banks were partly to blame. Rather than looking bad by writing off poorly performing loans, they had kept lending to failing companies, creating these zombie entities.

A study supported by the Bank for International Settlements (BIS), which observed the same forces at work in 14 advanced economies, confirmed this suspicion. Zombie firms are perpetuated by weak banks that prefer to roll over loans to struggling companies rather than write them off. Additionally, in a prolonged period of falling interest rates, it makes sense for companies to refinance at a lower cost.

Inevitably, zombie companies remain weighed down by debt. They have borrowed heavily to prop up operations in the hope that things will turn around. But for many, that doesn’t happen. The result is a slew of companies whose earnings are eaten up by debt repayments, leaving little or nothing at all to invest in the projects that may free them from their burden. Since early 2020, zombie companies have borrowed around $1 trillion. Zombie debt is now about $2 trillion — approximately one-fifth of the total $10.5 trillion US corporate debt obligations.

Such a large amount of debt that may go bad is not a happy prognosis for an economy struggling to recover from the ravages of the coronavirus. Concern is also mounting that such sizable resources idling in lackluster companies rob more robust and innovative enterprises of funds they might use to increase employment and contribute to economic growth. As the BIS study puts it, “The survival of zombie firms may crowd out investment in and employment at healthy firms.”

Another macroeconomic danger of zombies is the rise in unemployment that would result if many are closed. For the individual firm, too much debt increases the risk of default, among other things, and reduces the incentive to invest. At the macro level, this corporate debt “overhang” should decrease productivity, which depends on investment in new technologies.

However, economists at the Federal Reserve Bank of New York challenge that view. A December 2020 study they authored found that “in aggregate, there is no evidence that corporate debt booms result in deeper declines in investment or output.” While debt may reduce the number of investment projects undertaken by larger corporates, no such hesitancy is evident in the small business sector. Additionally, while it has inhibited business activity in one way, the pandemic has stimulated it in another: the number of business startups has risen to record highs. 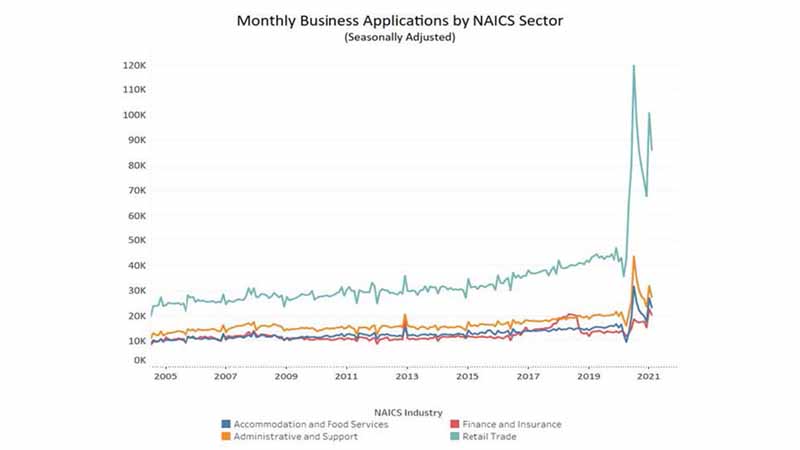 A lot of this entrepreneurial activity can probably be attributed to those who have lost their jobs creating new ones for themselves. In April 2020, 20.5 million Americans were thrown out of work. This is far more than the 15 million who were unemployed in late December at the height of the Great Recession of 2008 (GR). The unemployment rate climbed to 14.7% in April 2020 (during the GR, it never crossed 10%). It has fallen since. At the end of February 2021, the unemployment rate stood at 6.2%.

Federal support programs might also be responsible for igniting the startup fever. Unemployment benefits provided a safety net that may have encouraged risk-taking. The “economic impact payments” swelled bank accounts. While some entrepreneurs closed shop, others saw opportunities and started new businesses.

The pandemic may have revived the American spirit of enterprise that some had warned was in decline. Most notably, the crisis accelerated the trend toward further digitization of services, particularly those that can be delivered remotely. Both for business and for pleasure, Americans congregated online. On Zoom, for example, daily users of the video communications company’s platform went up by 2,900%, from 10 million to 300 million in April 2020.

Other trends are discerned by following the money. Three of the biggest tech IPOs, or initial public offerings, were launched in 2020: Airbnb, which hosts an online marketplace for lodging; DoorDash, which operates a food delivery service; and Snowflake, the cloud computing-based data warehousing company.

As should be expected, the health sector was also on investors’ minds. In 2020, venture funds poured twice as much into health technology companies — $14 billion — as they did in 2019, according to an analysis by Deloitte. Another area that seems poised for disruption is education. Remote learning — a necessity to curb the spread of the virus — is likely to become a part of the new status quo. “From kindergarten through college, the shift to remote learning has upended education, “ says industry expert Jack Tai, a co-founder of an educational platform that allows university students to collaborate and share study resources.

The Advent of the Gig Economy

A change in society is certainly underway, as social behavior and digital technologies spur further development of the economy. Moreover, the emergence of the “gig economy” has given thousands of individuals an experience of autonomy, financial rewards, and exposure to risk — all things that entrepreneurship brings. For many of them, there is no going back. A “gig” is a single project or task for which an independent contractor is hired to work on demand, often through a digital marketplace.

Already, at the end of 2018, around one-third of US workers were self-employed in this way. A decade earlier, it was about one-tenth. It is difficult to say to what extent this trend will continue. But if it does, it signals not only that America’s innovative spirit is alive and well but holds the promise of mitigating one pressing social problem: income inequality.

The gap in income between the rich and poor keeps rising. Census Bureau data analyzed by the Pew Research Center shows the growing disparities in the shares of US gross aggregate income held by upper, middle, and lower-income households from 1970 to 2018.

If an increase in entrepreneurial activity can redistribute the economic pie more equitably, small businesses, which already contribute around 44% of total GDP, will not only foster America’s economic growth but also play a central role in the country’s social development. 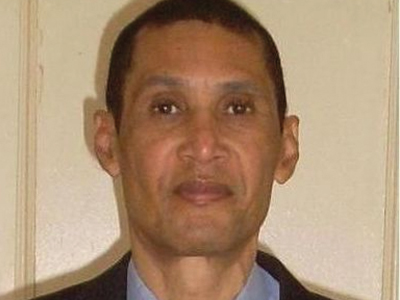 Anthony is the owner of Kip Art Gifts, an ecommerce store that specializes in art-inspired jewelry, fashion accessories and other objects. Previously, he worked as an accountant and financial analyst. He enjoys writing on small business, financial intermediation and economics. Anthony was educated at Wilson’s School and the London School of Economics and Political Science.