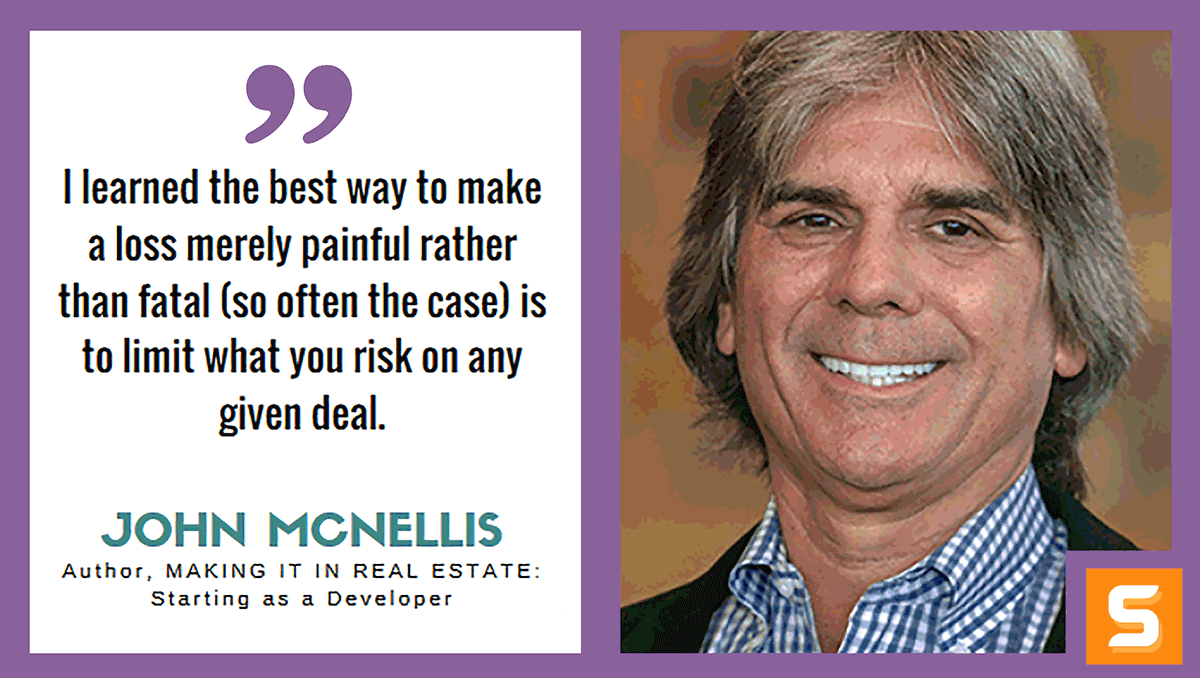 John McNellis is the founder of McNellis Partners, which specializes in developing supermarket-anchored shopping centers. His partnership has grown on its strategy of developing only about two projects a year and to do so with internal capital only.

In this interview with Startup Savant, John outlines a few interesting parts of the book, his lessons when running a real estate business and how to manage risks as a real estate entrepreneur. He also uncovers some hidden realities in the real estate industry and that banks could come and go at the most inopportune times.

His advice to entrepreneurs starting a business:

Before I would start a business anywhere, I would research this question: Is this city growing? Is it vibrant? If a city’s prospects for growth are dim, if it is stagnant or worse, bleeding jobs or population, you need to move.

Congratulations on your new book, John! Can you tell us what this book is all about? Its purpose?

My book is about the fundamentals of running your own real estate investment company: how to choose properties and how to deal with property owners, brokers, bankers and everyone else in real estate. In short, it’s about how to succeed in an unforgiving world.

I recount many of the mistakes I made and the hard lessons I learned. “Never borrow money to buy land” is one I wish I had learned in the beginning.

The book is meant to help would-be entrepreneurs who have realized—or are about to realize—that real estate may be the best avenue for going your own way in the business world.

Who or what inspired you to write “MAKING IT IN REAL ESTATE: Starting as a Developer”?

If you had asked me what a developer was when I was twenty, I would have guessed it was someone who worked in a photo lab. I had no idea about business. Rather having a small gift for writing, I was a journalism major at Cal. I edited my school paper in law school. My dream then had nothing to do with business or law; it was to become a famous author.

Life took me down a different path, however. I began as a real estate business lawyer, but soon became a developer. For thirty years, I did little beyond running our highly successful company—we develop and own shopping centers in northern California.

Then six years ago, the Registry Magazine of San Francisco asked me to start writing a monthly column about real estate. With that, I returned to writing. The columns became popular among real estate’s elite, my readership grew and the book naturally evolved from my work with the magazine.

How can “MAKING IT IN REAL ESTATE: Starting as a Developer” help thriving developers, brokers and contractors maximize profits?

By reminding them that no one thrives forever in real estate and that caution will prove their best friend in the long run. Sooner or later everyone—I mean everyone—loses money in real estate.

I lost money every way I can in real estate. I learned the best way to make a loss merely painful rather than fatal (so often the case) is to limit what you risk on any given deal. If you put all of your assets into—or personally guarantee —every project you do and your projects grow bigger and bigger, you will go bankrupt. That I will personally guarantee.

Can you share with us some interesting parts of this book that could help entrepreneurs manage risks and overcome failures?

As an entrepreneur desirous of becoming a bestselling author, I am of course compelled to advise, “Read the book”.

That noted, I will focus on a less obvious risk: banking relationships. As an entrepreneur, you must be aware that banks come and go, often at the most inopportune times.

In 1992, the economy was as bad as the Great Recession’s, with real estate hit especially hard. Everyone was running scared. At the time, we had just one bank, Bank of California. Even though we had never missed a payment, were current on our loans and had a great credit rating; the bank called our line of credit, demanding immediate payment. Why? Because the Japanese-owned bank wanted out of American real estate altogether.

While the decision in Tokyo had nothing to do with us, it nearly killed us, forcing us to find replacement financing at a time when no one wanted to lend. My advice: Try to maintain at least two—preferably three—banking relationships at all times.

'As an entrepreneur, you must be aware that banks come and go, often at the most inopportune times.'

What are the advantages of starting real estate development as a side gig? How would it shape success?

You can’t run a software company or even an ice cream stand as a side gig. But you can do real estate whenever. At 25, I was a young lawyer who wanted more out of life than writing briefs.

Besides writing, what else do you do as an entrepreneur?

I run one of the most respected retail development companies in Northern California. Over the past thirty years, we have developed more than four million square feet of retail; Wal-Mart, Ross Dress for Less, Grocery Outlet and Safeway count us among their preferred developers. Check out our website at McNellis.com.

What does your day-in, day-out look like as an entrepreneur, founder and author?

I usually come to the office about 7:30 and write for an hour or two before work gets busy. I then spend so much time on the telephone—with buyers, sellers, tenants, brokers and the like—that I wear a headset, looking like an old-fashioned receptionist.

I devote a fair bit of my time to a handful of non-profits and charities, and I try to work out—aerobics, weights, yoga—about 5 times a week. I leave for home about 6 and come to the office for half days on Saturday to write.

What is the most exciting moment of your entrepreneurial journey?

There is no most exciting moment for an entrepreneur. Rather than the moment, it’s the journey, a journey one might liken to an arduous backpacking trip in the Sierra, where each hard-fought ridge crested reveals yet another higher, dispiriting ridge in the distance.

The trick is to look back when you top each of those endless ridges, take a deep breath and—for the moment at least—marvel over how far you’ve come and how much you’ve accomplished. Then you shoulder your pack and push on. Rather than exciting, the word should be satisfying. A good, long career as an entrepreneur will be.

Have you encountered troubles or mishaps when starting a business? How did you fix them?

In the beginning, we must have encountered every problem known to real estate, problems that we had to fix the hard way, through persistence, through blocking and tackling. Starting out, the problem is often that your project, whether a duplex or a 7-11, takes too long before the rent finally starts or costs too much to develop.

There is no magic bullet; the only solution is to put more money into the deal. The best way to make this problem far worse is to fail to tell your investors about it immediately. Full and complete disclosure solves a host of problems.

By the way, as long as you’re in business, you will have problems. My shrewd mother used to say, “No problems, no business.”

'The where you develop is far more important than the what you develop.' - @John_McNellis

What advice would you give to our readers or young entrepreneurs who want to start a business today in Philadelphia? Where should they start?

Before I would start a business anywhere, I would research this question: Is this city growing? Is it vibrant? If a city’s prospects for growth are dim, if it is stagnant or worse, bleeding jobs or population, you need to move.

To paraphrase Warren Buffet, I’d rather be a mediocre developer in a brilliant city than a brilliant developer in my hometown of Lancaster, California. I know nothing about Philadelphia—it may be a terrific town—but the first thing I would do is verify its rate of growth and future prospects. The where you develop is far more important than the what you develop.